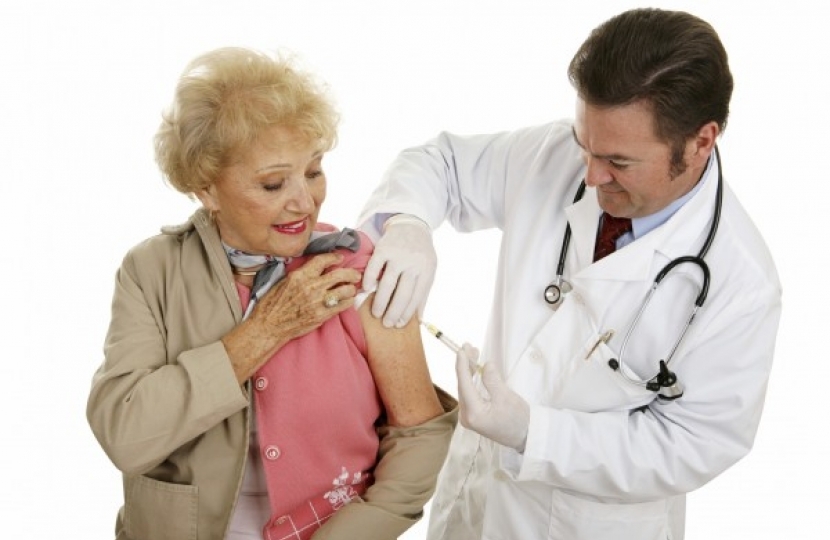 2020 has been a long hard year but, as it draws to a close, we must take heart from fact that the first Covid vaccination programme in the world has begun and, at last, we can start to look forward not backwards. I was especially pleased that three GP surgeries in Thirsk and Malton were amongst the first community sites to offer the vaccine to the over 80s, starting last Tuesday.

This wonderful news does not detract from the enormous sacrifices that so many people have had to make and for the personal losses many have suffered. I am very sorry for any of you who have had their Christmas plans changed because of the latest set of measures. The reality is that the situation is very serious indeed not just here in the UK but across Europe and this has led to last minute decisions and a change of direction. The hospitals are filling up fast across the country with more than 2,000 admissions a day and the number of positive cases of the disease was 35,928 yesterday which is about twice the number the previous Sunday. As you will know this is partly because of a variant of the virus, which it is now believed to be 70% more transmissible than the original.  A better understanding of the dangers of this new strain only became known at the end of last week.  In the light of this a quick decision had to be taken to close down London and the South East to prevent it from spreading to the rest of the country. We absolutely have to stop our hospitals, many of which are already at capacity and under pressure because of staff sickness, from being overwhelmed to save lives by treating those people who are seriously ill and of course we want to make sure this new mutant doesn’t take hold here in Yorkshire.

I know that our fantastic hospitality sector has been especially badly affected by the restrictions and there are some who may have lost business, staff and, in some cases, their savings in order to stay afloat. We have all had our liberties curtailed, missed out on holidays, family parties and weddings and many others have suffered from sheer isolation. The Chancellor made an extraordinarily generous package of measures worth £280 billion for jobs and incomes through the furlough scheme, grants for the self-employed and other support for businesses and a further £74 billion to strengthen the welfare safety net. I know that nothing is ever the same as actually doing business. As you will know I am myself a businessman and I have been through three recessions. I know how hard it is but I do sincerely believe that this recession is different. When we open our doors again without Covid restrictions, largely thanks to the Chancellor’s support, business will flood in and I am confident that we will be able to rebuild and flourish again.

It is only to be expected that there has been a huge debate about how to handle the crisis and there has been differing scientific opinion. In time, there will be a public inquiry and I don’t doubt mistakes will have been made. I do know that ministers have worked night and day to try to guide us through and, in the end, it is not you or I but the Prime Minister who has to get up at the dispatch box to explain why tens of thousands have died and why others have not been able to access a hospital bed. Across Europe political leaders are agonizing over the same issues and, in every European country, including Germany (now in full lockdown) and Sweden, which originally appeared to buck the trend as far as Covid deaths were concerned, the numbers are rising and difficult decisions are being made. It is easy to criticize and hindsight is a wonderful thing but I do not believe that any other government, whatever the colour, would have done a better job. This is a situation which changes not just by the week but by the day and it is not therefore possible to map out a cast iron plan. We have to adapt according to the new evidence and this is what the Prime Ministers and his ministers have had to do.

The good news is that in recent weeks our Covid rates in Thirsk and Malton are half the average in England, half anywhere else in Yorkshire and hospital beds are 50% lower than 4 weeks ago. Furthermore, Ryedale and Hambleton districts have similar infection rates to Herefordshire which is now in Tier 1. I have made these points repeatedly to ministers and will continue to press for district-based tier allocations, which I agree would be the fairest way to allocate them and much better for business.

As we head into the Christmas week I can only reiterate what has been said so many times that we must all take the measures we think necessary to protect those around us over the short festive break. As we enter 2021 with the promise of herd immunity through a wider vaccination programme, once the Oxford Astra Zeneca vaccine is fully approved, we will be able to refocus on the economy, on levelling up the North with the South, improving our transport and digital infrastructure, build new houses and create much needed new local green jobs.

Negotiations with the EU are ongoing. Perhaps it was inevitable that it would go on until the very last possible minute. If Parliament is recalled I will return to Westminster to debate and vote on it. Whatever happens we will leave the transition period for good on New Year’s Day.