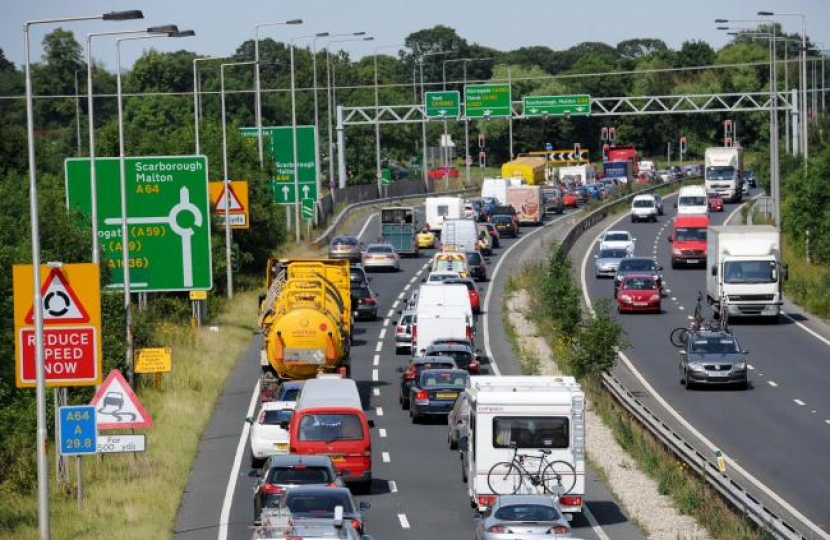 The preferred route for a dual carriageway for the A64 will be announced in the summer of 2019 following a six week consultation starting this Autumn.

I have been keeping up the pressure on Highways England and speaking regularly to Ministers and the Secretary of State for Transport about extra funding for the A64 improvements. So I was encouraged when Highways England told me that it is keeping to a tight timetable to ensure that all the processes are completed in time and that we are still on course to start work in 2022. It is currently conducting a traffic model exercise to look at the levels of traffic at different times of the year, including bank holidays and holidays, so it can assess the cost benefit. Highways England has already met with a number of landowners and residents along the route to understand their main concerns and it is working with the A64 Strategic Partnership group to find out what economic benefits the improvements would bring. Once this work has been completed and all factors taken into consideration including the impact on houses, farms, woodlands and safety, there will be a consultation in the Autumn of this year. The options will be costed and a preferred route will be announced in the Summer of next year. A final decision will be made later in 2019 subject to the Department of Transport including the scheme in the next road investment period (2020-2025). I will continue to press ministers for the extra monies needed to complete the works and I remain confident that work on the A64 carriageway (between Hopgrove and Barton Hill) will start in 2022.

I have also been campaigning hard to improve safety both at Crambeck and at Rillington I have met with Highways England on several occasions, along with the local councillor Caroline Goodrick and campaigners, Andy and Carol Sollitt, to find a way to make sure the stretch of road near Crambeck is made safer, following the tragic deaths of four people last summer. Highways England is currently undertaking a detailed survey, after which it will consider all the options. This could include pedestrian refuges, signage and average speed cameras depending on the budget and following consultation with local people. Work on these improvements could start in 2019.

At a meeting at Rillington with local councillor, Janet Sanderson and local residents, Highways England promised to look into the issues we raised. This includes allowing slower vehicles to clear the junction when turning right by the Coach and Horses pub, by increasing the time allocated by the traffic lights; reinforcing and extending speed limits as part of a village gateway section of the A64 before entering Rillington and considering the use of guardrails as a means to reassure pedestrians using the pathway adjacent to recently damaged walls.