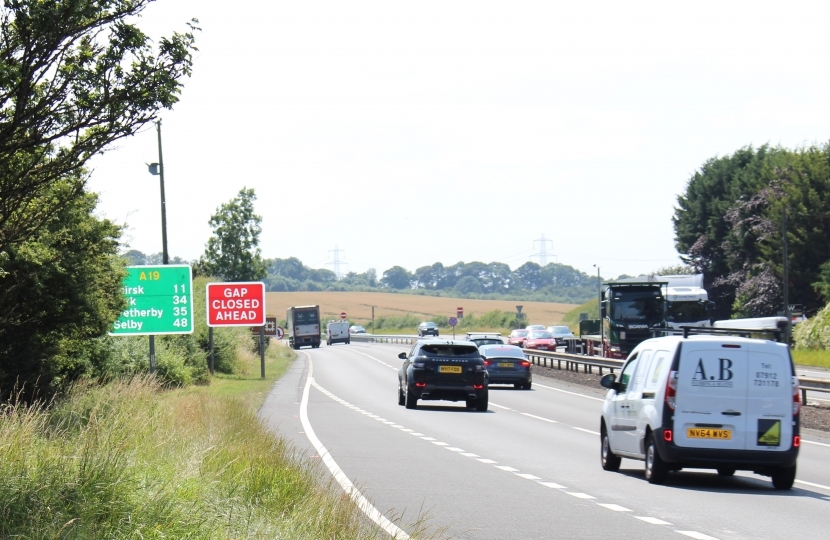 Following completion of work to close gaps in the central reservation at Mount Grace Priory, near Northallerton, Highways England is pressing ahead with design work on additional safety improvements.

Detailed design work is being carried out on the stretch of the road between the A172 Tontine junction and Trenholme Bar, near East Rounton. Designs are also being worked on for the road between the A684/Ellerbeck junction and Knayton, north of Thirsk. The work includes the closing of central reservation gaps and some access points, new junctions, and improvements to safety barriers, signs and road markings after consultation with local people.

It follows a joint campaign by myself and Rishi Sunak for safety improvements following a road crash in which an 83-year-old woman, Sonia Rose, died when a van drifted through a gap and hit her car travelling in the opposite direction. We have worked with the family of Mrs Rose to press Highways England to make the improvements.

I welcome the campaign’s progress. This can be a very dangerous stretch of road and these improvements are needed to make sure that the road is safer for everyone to use and to prevent future tragedies and heartbreak such as that endured by my constituents the Rose family

Mr Sunak said: “All the improvements Highways England has committed to will make a big difference to this vital regional artery which is carrying more than 40,000 vehicles a day.

“The needs of local residents and farms will be taken into account but what has been achieved at Mount Grace Priory is an example of what can be done to improve safety while maintaining access.”

The new junction provides safer access to the English Heritage attraction with the addition of acceleration and deceleration lanes as well as the closure of the central reservation gap.

Katy Rose, daughter of Mrs Rose, said: “The family very much welcomes the continuing support of our MPs to make the road safer.”