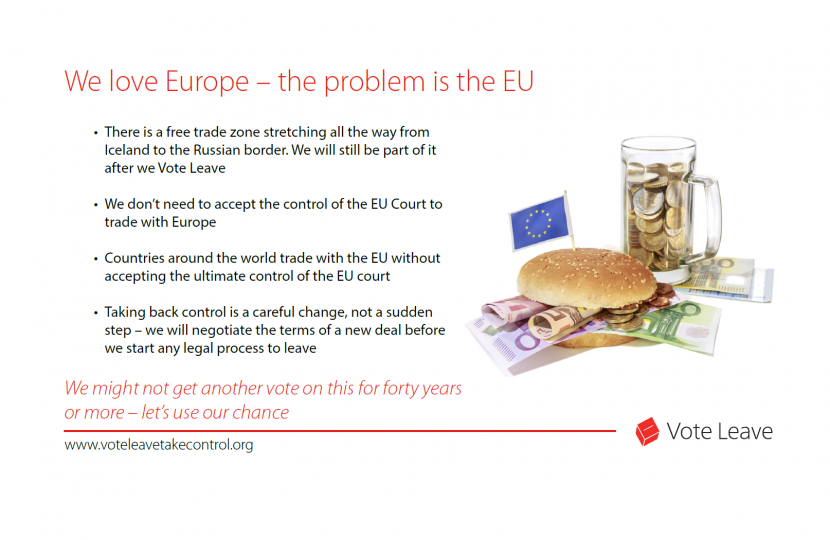 I’m sorry we have had to extend Article 50 again. But we will leave the EU. We have made that solemn promise in the Referendum in 2016 and we will deliver on it. At the moment there is no doubt that Parliament will not accept no-deal so we will have to find another way through this. Promises were also made that we would leave the European Union in an orderly fashion. I have the copy of the manifesto for Leave – the official Vote Leave campaign (pictured and attached), which says there is a free trade area which stretches from Iceland to the borders of Russia and we will be part of it. We have to make good on this because this is the promise we made to consumers and to business people and the people who work for them.

So the way we deliver this is we must work on a cross-party basis. If we look at the two positions of the Parties, the Conservatives have said that we will have control of our borders, our laws and our money and we will continue that free trade agreement. The Labour position is pretty much identical. The only sticking point is the Customs Union which prevents us from having trade deals with the rest of the world – independent trade deals. Last week, in the indicative votes, Labour changed its position and supported a solution which did not include the Customs Union but which included a Customs arrangement so no permanent Customs Union. That’s pretty much what the PM says in her deal. So we are nearly there.  If we can put Party politics to one side and work cross-party in the national interest we will get there and I think we will get there in the next few weeks and not the few months some people are talking about. Hopefully, this means we should be out by the time the European elections take place on May 23rd.

The Government is firmly behind businesses in North Yorkshire as we emerge from lockdown and start to rebuild the economy stronger than ever and the latest figures show the extent to which the Treasury has supported jobs, incomes and businesses across all parts of the constituency.