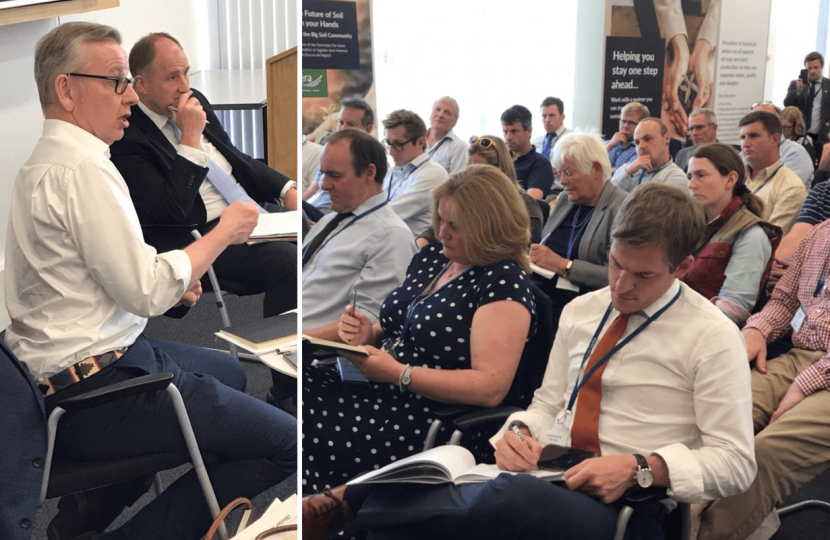 I was very pleased to welcome the Environment Secretary, Michael Gove MP, to the constituency. He told farmers representing the arable, beef, dairy, poultry and sheep sectors at a meeting in Sand Hutton, which I chaired, that a post-Brexit government would put farming and food production at the heart of its policies to ensure that the UK produces the best food in the world.

Mr Gove was challenged about the delays in introducing the new Environmental Land Management Scheme (ELMS) which will change the emphasis, post-Brexit, to paying farmers for public goods rather than providing income support which the current, area-based scheme, largely does. Mr Gove acknowledged that the new system presented "legitimate challenges" but that there is a "fair bit of time" to ensure that the government gets it right. Mr Gove said that if he needs to delay its introduction then he would be willing to be flexible because "the worst thing would be to bring in a scheme, which doesn’t work". Mr Gove told farmers worried about the definition of public goods that the detail will be much clearer by September when they should know what is going to happen and when.

The Environment Secretary also talked about his plans to create a new watchdog commission to maintain high British food production standards in post Brexit deals. Some farmers raised concerns about food production taking second place to the environment.  Mr Gove said he wanted to encourage people "to buy British wherever possible and encourage the understanding and appreciation of local food". Mr Gove said it was important to have a food strategy and make a noise about it. He stressed that food production should go hand in hand with environmental issues which are currently high up the political agenda and this would be the best way to get the Treasury’s attention.

The Environment Secretary was also asked about national biosecurity in the event of a 'no deal' Brexit. Mr Gove acknowledged that a 'no deal' would hit some agriculture sectors very hard and would present challenges for biosecurity. However, he said he is very hopeful that we would get a deal, although he emphasized we must prepare for all eventualities. Whatever the outcome, he said it is important that the Government works hard to improve biosecurity outside of the EU to give the UK best possible guarantee of quality and food security.

We were all grateful to Mr Gove that he found the time to come and visit us in North Yorkshire and speak directly to farmers. It was a great boost to our farming community that they were able to hear from him first hand and I think he helped put their minds at rest over some of the issues which, understandably, concern them at this challenging time.