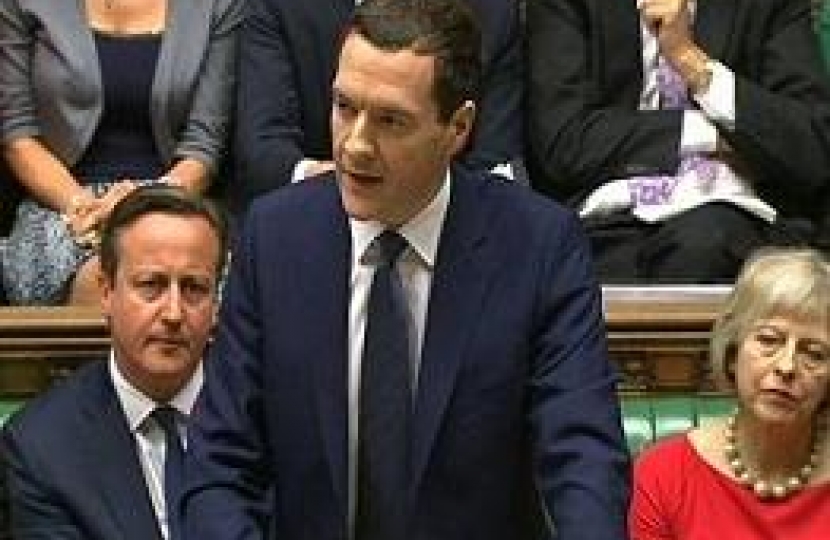 I welcome the Summer Budget and its commitment to finish the job on the deficit, to keep moving Britain to a higher wage, lower tax and lower welfare economy, and to put security first for families in the Thirsk & Malton Constituency:

The economic security of a country that lives within its means: the forecasts show that Britain will be the fastest growing major advanced economy for a second year in a row. However, the deficit is still too high, so the Budget sets out a balanced plan to cut the deficit at the same rate as in the last Parliament in order to achieve a surplus by 2019/20

The financial security of lower taxes and a new National Living Wage: the new National Living Wage will mean two and a half million people get a direct pay rise.  It will start next April at £7.20 an hour and we expect it to reach £9 by 2020. Those currently on the minimum wage will see their pay rise by over a third this Parliament, a cash increase for a full time worker of over £5,000. There is further support for working people with an increase in the tax-free personal allowance, so people will be able to earn £11,000 before paying any income tax at all. We will also raise the 40p rate to £43,000, lifting 130,000 people out of this higher tax rate.

Cutting tax on business to secure growth, with Corporation Tax reduced to 18 per cent: we have already taken this rate to the lowest in the G20 and aligned it for large and small businesses. However, we cannot afford to stand still, so we will cut it further to send out the message that Britain is open for business.

The national security of a country that defends itself and its values: The Budget commits to meeting the NATO pledge to spend 2% of our national income on defence – not just this year, but every year of this decade.

Making £12 billion of further savings in the welfare budget. Britain’s present welfare bill is unsustainable and we have set out £12 billion of savings to get it down. We’re doing this according to principles of: supporting the elderly, vulnerable, and disabled; expecting those who can work will to look for it and take it when offered; and ensuring working-age benefits are on a more sustainable footing.

Backing businesses to create more jobs: cutting the jobs tax for firms. From 2016 the Employment Allowance will rise by 50 per cent so a firm will be able to employ four people full time on the new National Living Wage and pay no national insurance.

Delivering a plan for productivity and rebalancing the economy: the Budget takes further steps to rebalance the economy, devolving power across the UK and helping build the Northern Powerhouse. We’ll also set out a comprehensive Plan for Productivity – securing investment in transport, skills and housing. As part of this, an apprenticeship levy on large firms will help fund 3 million apprenticeships in this Parliament. We are also removing the artificial cap on university, and so this is affordable we will tackle the cost of student maintenance grants, replacing them with loans for new students from 2016/17.

A cross-department plan to tackle Britain’s productivity puzzle: the UK has been growing faster than any other major economy, but our productivity has persistently lagged behind them. This plan sets out our approach to address that, with action in 15 key areas, based around the needs to encourage long-term investment in including infrastructure, skills and knowledge; and to promote a dynamic economy that encourages innovation and makes the best use of its resources.

Central to that plan are changes to planning laws to increase housebuilding. The plan promotes this with new measures including:

Supporting saving and aspiration by taking the family home out of inheritance tax: we are raising the effective threshold for most couples to £1 million – so family homes are no longer hit by the tax.

Making sure the best off pay their fair share of taxes: we have set out measures to raise £5 billion a year from tackling tax avoidance and aggressive tax evasion. Alongside this we are abolishing permanent non- dom status, and tightening the rules to British people pay British taxes in Britain.

Overall, a budget that continues our commitment to making work pay, moving from the entitlement culture of the past to one of personal responsibility, where those who can pay their own way do so and more money and help is made available to those who cannot.