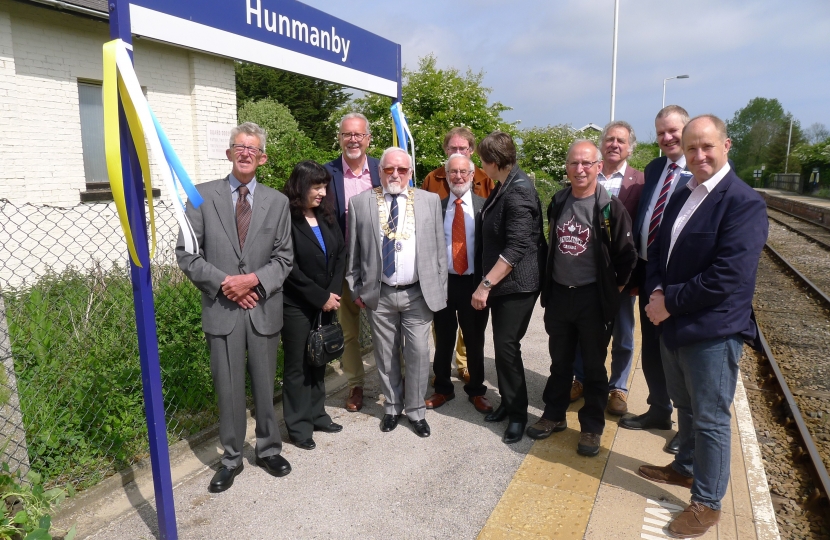 I was delighted to join local residents, business people, councillors and Friends of the Hunmanby Railway Station and school children to celebrate a new era of train services stopping at the villages of Hunmanby and Filey from mid-May onwards. The number of trains passing through and stopping at Hunmanby and Filey has increased from nine to fifteen in each direction from Mondays to Saturdays and there will be twelve services instead of six on Sundays. There will be an extra early morning train from Hunmanby and Filey leaving Hull at 05:33, stopping at Hunmanby at 06:21, then Filey at 06:26, Seamer at 06:37 and Scarborough at  06:44 to connect with the TransPennine service to York and Leeds.

These changes have come about after a huge coordinated local effort by the Friends of Hunmanby Railway Station, local councillors and local businesses and I congratulate them on their success. I have had a number of meetings with North Yorkshire County Council and Northern Rail to ensure that the new timetable fits local needs and is convenient for passengers and have been delighted to support their campaign. The significantly increased services will make a massive difference to everyone, especially the early service. Not only will it mean people are better connected between local towns and villages, but it will also mean that they can reach York, Leeds, Manchester and London by train via TransPennine Express, saving time and cutting the need to drive long distances and pay heavy parking charges.

Nick Harvey from the Friends of the Hunmanby Railway Station said “The railway line between Scarborough and Bridlington via Filey, Hunmanby and Bempton, faced an uncertain future 30 years ago - with closure a distinct possibility, let alone cutting services. The best passenger service in the lines history, could not have happened this month without the work put in over those 30 years by many people and organisations. Two former long standing Councillors deserve recognition. David Murton, Former Mayor of Filey and Godfrey Allanson, former Mayor of Scarborough Borough Council have been at the forefront of the campaign for the line to be retained and improved in those difficult years for rural lines in the 1980's and 1990's. Furthermore, If British Railway's Manager for the area had not had the foresight to retain the twin track section of track between Hunmanby and Filey, when there was intense pressure to cut costs, a reliable hourly train service would not today be possible.”

Pupils at Hunmanby School Art Group have produced over 30 laminated pictures of the train station and other attractions in the village, such as the Hunmanby Gap beach. Some are already on display at Hunmanby Station's community notice board. Northern Rail is providing two more community notice boards so that all the artwork can be seen and help brighten up the station platforms.

I will work with Northern Rail, Network Rail and TransPennine Express to improve connections further at Seamer and Hull from the Winter timetable changes from December 2019.