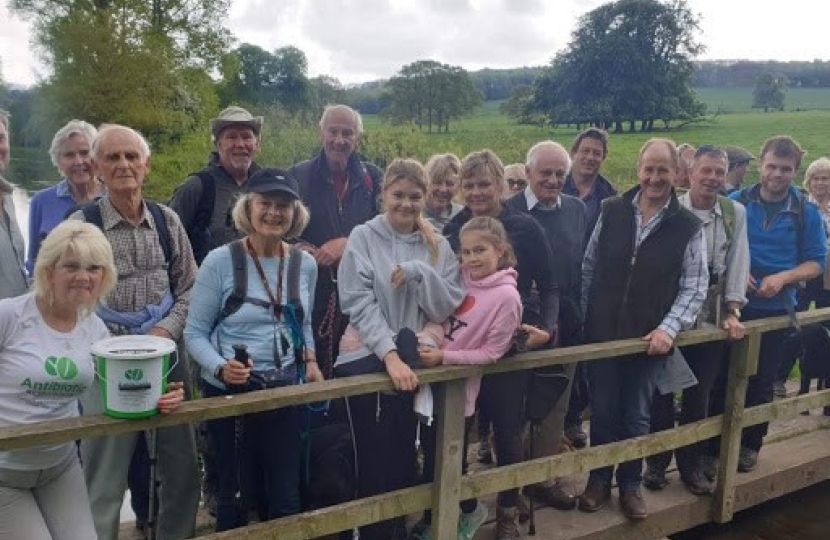 I was delighted to take part in a sponsored walk in aid of ANTRUK, a North Yorkshire charity close to my heart. ANTRUK is the world’s first charity dedicated to tackling antibiotic resistance, which is one of the most urgent threats to public health. Antibiotic resistant bacteria can cause dangerous infections that were once easily treatable. As a result, around 750,000 people die every year from resistant infections - a figure which is predicted to rise to 10 million people a year by 2050 according to Lord O’Neill of Gatley’s Review of Antimicrobial Resistance (AMR).

The 7.5 mile walk, during which I was joined by my wife Nikki and children, covered some of the historical sections of the Yorkshire Wolds Way where walkers can follow in the footsteps of the Market Weighton Giant, William Bradley, who, at 7 feet 9 inches is recorded as the tallest British man who ever lived.

I have been supporting this charity in Parliament, whenever I can, most recently calling on the Health Secretary to impose a resistance tax on the pharmaceutical sector to go towards the £20 million we need to raise every year to tackle the problem. It was a privilege to be included in this walk in such wonderful countryside. ANTRUK is raising money for a number of important projects in its battle to tackle antibiotic resistance. Recently it has screened over 150,000 drug and bacteria combinations in its search for antibiotic resistance breakers to treat some of the most difficult superbugs. Funding is now needed to develop the nine most promising combinations.

Joy Richardson, ANTRUK’s administrator who personally organised the charity event said “I’d like to thank Kevin Hollinrake for his invaluable support, not only for taking part in our walk but for his continued support in Parliament. We are a small, but growing charity with a hugely important agenda and his backing makes all the difference.”