Prime Minister confident that A64 dual carriageway will go ahead 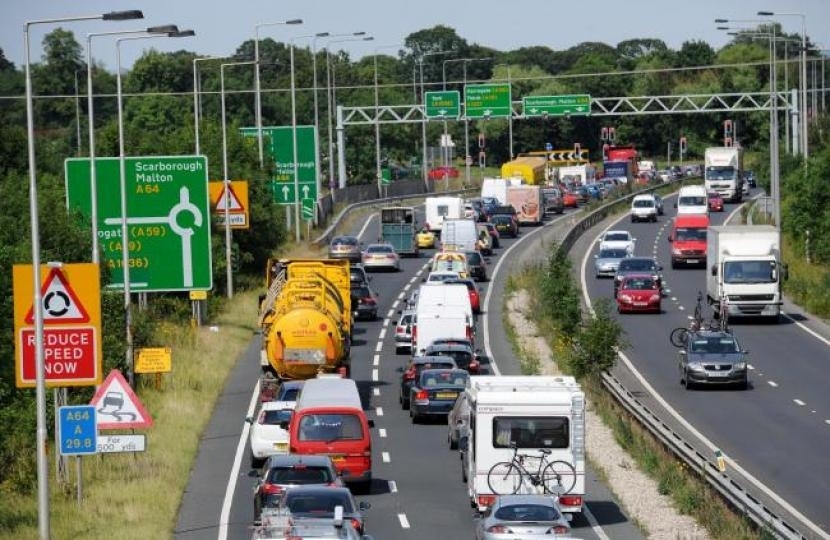 Prime Minister, Boris Johnson, has assured my neighbouring parliamentary colleagues and I that our efforts to foster local support in our campaign for a dual carriageway between Hopgrove Roundabout and Barton Hill is the reason it is now earmarked for dualling.

In a letter to me, Robert Goodwill MP (Scarborough and Whitby) and Julian Sturdy MP (York Outer) the Prime Minister wrote “With regards to dualling the A64, I commend you for the efforts you have made to promote the proposal to date, assembling and nurturing local support for it. There is no doubt that, in doing so, you have generated the confidence in the proposal’s deliverability that has seen it included in the pipeline of schemes for development”. Mr Johnson also said that he was confident that, if they continued their campaign, “this work should enable it to be funded for construction in the next Road Investment Strategy (2025-2030)”.

We have been working with the A64 Strategic Partnership Group, made up of representatives from businesses and local councils, to make repeated representations to transport ministers and Highways England about the economic and social benefits of this much needed improvement, which would bring an end to long traffic jams.

We also welcomed the Prime Minister’s pledge to ensure that the decision-making processes on infrastructure spending are fair across the country. Mr Johnson said that the review of the Green Book rules, the manual used by ministers to make investment decisions and which we argue favour wealthier areas such as London and the South East, will mean that the Government will take informed decisions in support of its levelling up agenda. But he also said that in the meantime ”officials will continue to work with schemes to consider social, environmental and economic impacts and level up all regions”.

I have been campaigning hard for both improvements to the A64 dual carriageway and for a fairer share of investment funding for the North since I was elected so I am grateful for the Prime Minister’s support in both these areas. We wrote to the Prime Minister in the summer to ask him to make sure that, whilst the Green Book review was underway, no further decisions would be made based on this outdated and misguided basis. This is good news for the North and good news for the A64.

Robert Goodwill said “The Hopgrove Roundabout has been a byword for motorists’ misery for many years.  Although this section is 30 miles or so from Scarborough itself, this is the single most important infrastructure project for businesses, particularly tourist businesses, on the coast.”

Julian Sturdy added "I was very encouraged to hear the Prime Minister give his backing to the A64 dualling scheme and hope that this will translate into a funding announcement in the not too distant future. It is vital that we hold the Government to their election pledges to invest in the North and I know that the Prime Minister shares our determination to not see this blown off course by Covid. Now more than ever it is time for the region to make the most of the economic opportunities that this investment will bring."

I am appealing to local communities to come out in support of independent retailers and local businesses on Small Business Saturday on 5th December.