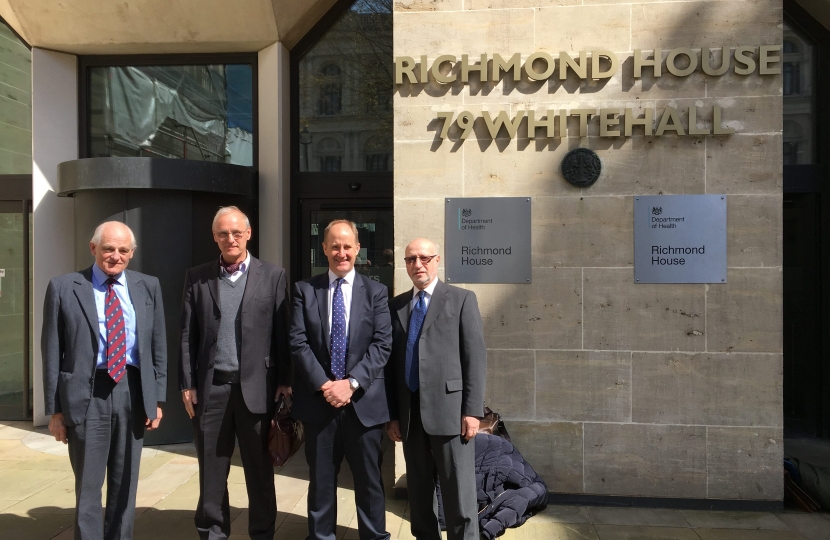 Kevin Hollinrake, MP for Thirsk and Malton has raised the major global health problem of anti-microbial resistance with the Prime Minister, the Health Minister and senior officials from the Department of Health and Public Health England. The issue is of both national and international importance and vital research of global significance is being undertaken by a national charity based in North Yorkshire, Antibiotic Research UK (ANTRUK).

Mr. Hollinrake arranged a meeting with ministers and officials at the Department of Health and Professor Colin Garner and Dr David Brown of ANTRUK’s Scientific and Technical Advisory Committee together with Ashley Burgess, Chair of the Trustees, attended. The MP also met privately with the Prime Minister to press for research funding for the charity.

“I met with the Prime Minister on Wednesday 20th April and with Health Minister, Jane Ellison MP on Tuesday 19th April to discuss the growing danger of anti-microbial resistance. A number of bacteria have already become resistant to last-resort antibiotics and 25,000 people in Europe die every year due to drug-resistant infections. According to the Department of Health, antimicrobial resistance (AMR) costs the NHS approximately £180 million a year. New drugs and medicines are normally developed through expensive research and development carried out by large pharmaceutical companies whose investment is returned through future sales. As any new antibiotic needs to be used as a medicine of last resort, there is a not the usual incentive to invest.

Whilst, according to the recently published review on AMR by Lord O’Neill, it will take “at least 10 years before we are able to treat those affected by the worst superbugs”, ANTRUK are taking immediate practical steps to tackle the problem by developing new antibiotic therapies by early 2020’s, educating the public and professionals about antibiotic resistance and providing patient support.

The charity is uniquely placed to make a significant impact as it is a not for profit, does not have to provide shareholder returns and could deliver low cost solutions. The charity has already raised £400k in private donations and its first research project will be completed by the end of 2016; it requires £1m to move to the next phase of their research. Most funding bodies, for example, NIHR, the research councils and Wellcome Trust, do not fund charities directly so Government help is essential.

The Third Sector is one part of the solution to finding new antibiotics. As new antibiotics need to be used as a treatment of last resort, there is an immediate need to introduce new payment models that will encourage investment and ensure there is a viable market for near-term and new antibiotics. Lord O’Neill will be producing his final report shortly and it will contain recommendations on delinking sales from revenue. The O’Neill report on AMR is due out in May.”

Mr. Hollinrake had previously raised the issue of funding research in the House of Commons. During Prime Minister’s Questions last month he asked to speak further with David Cameron. He agreed and during the subsequent meeting recently Mr. Hollinrake found him to be fully aware of the need for more research.

“The Prime Minister was very knowledgeable of the problem and has spoken out about the need to tackle this problem on a number of occasions. His reaction was very supportive and he agreed to write to Sir Mark Walport, Government Chief Scientific Adviser and Dame Sally Claire Davies, Chief Medical Officer for England, to ask them to see how we might be able to fund this important research. The health minister was also very supportive and has asked her officials from the Department of Health and Public Health England to meet with ANTRUK to help find the best way forward.”

“Kevin Hollinrake’s work to raise the profile of the charity at the highest levels of Government is to be congratulated. ANTRUK has developed a highly innovative research programme which as funding is secured for our research and educational programmes will make a real and measurable difference to patients’ lives in a relatively short time. As a virtual charity we can undertake research programmes which are fast and cheap to conduct. Kevin’s assistance in making sure our message is heard is just what we require to tackle antibiotic resistance”.

“I will continue to explore every possible avenue and by all possible means and follow up on the progress we have made so far with ministers and officials, particularly using parliamentary channels of debates, written and oral questions and requests for meetings.”