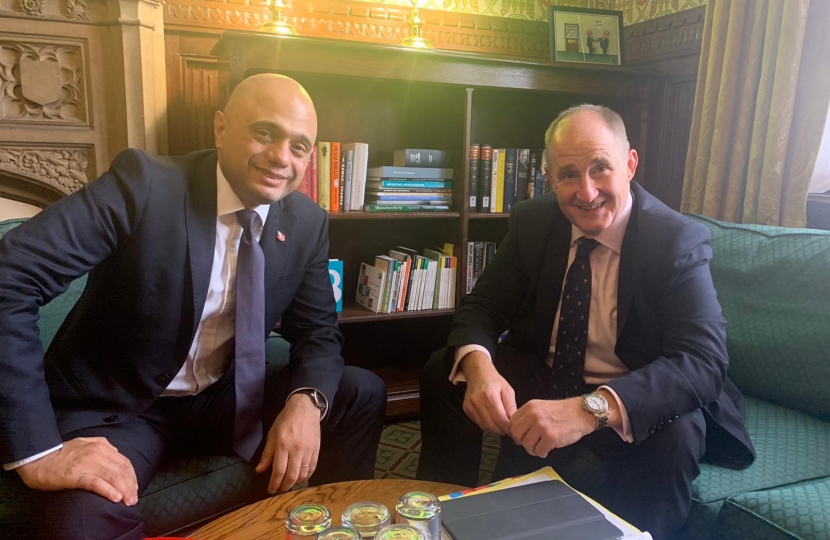 I took advantage of an eve of election meeting with the Chancellor of the Exchequer, Rt Hon Sajid Javid MP, to press the case for more funding for some of my key priorities, which include transport infrastructure in the North, dualling of the A64, reform of adult social care, a pharmaceutical tax to help eradicate antimicrobial resistance (AMR) and half-price homes for local first-time buyers on low incomes.

Whilst it is disappointing that the Autumn Budget has had to be postponed because of the general election, I am confident that the Conservative Party, with its clear message that we can deliver Brexit within a few days of the election and an exciting agenda focusing on the NHS, schools, reforming adult social care, house building and fighting knife crime will be returned with a clear majority. I was pleased to have had an opportunity to discuss with Mr Javid funding for some of my key campaigns in preparation for an early Budget when the House returns.

I made the case for £120 billion for northern roads and rails by 2050, including delivering Northern Powerhouse rail (HS3), which would massively improve journey times, increase capacity and enhance frequency of trains across the North from Liverpool to Hull and give passengers a much needed joined up rail service. This would in turn help rebalance the North/South divide and generate opportunities for young people by opening up skilled jobs across the North. I suggested that this could be partly funded by long-term borrowing from markets at record-low interest rates with a commensurate long-term payback arising from increased economic activity and associated tax receipts. I also reiterated the urgency of ensuring that dually of the A64 is included in the next major road funding scheme post 2020.

I also asked the Chancellor to supports his calls for a cross-party solution to adult social care funding which, he said, would help plug local authorities’ current funding gap of £3bn, which is set to rise to £8bn in five years. I stressed that it is essential to “rebalance an unfair system where local authorities in the North have less spending power compared with London authorities which, in turn leads to fewer or worse social care services in rural areas where the population is often older, as is the case in parts of North Yorkshire.”  I argued for a Social Insurance Model which would provide a solution similar to the one adopted by Germany in 1995 when they realised that their current funding formula was unsustainable and was recommended in the “Long term funding of adult social care inquiry” report produced jointly by the Housing, Communities and Local Government and Health and Social Care select committees. The plan would involve the government introducing a Social Care Premium, to establish a visible fund for people to contribute to, matched by their employer, which is clearly, transparently and accountably linked to spending on their own social care.

I also pressed the case for a 10 per cent resistance global levy on pharmaceutical companies would provide $4bn annually of monies required to take action against AMR. Pharmaceutical companies and research organisations would then seek monies from this fund to pay for research and development of new antibiotics and provide an AMR Global Innovation Fund supporting innovative new diagnostics and vaccines, good general disease surveillance and better water and improve sanitation. I reminded the Chancellor that, according to research led by Lord Jim O’Neill, AMR is responsible for 700,000 deaths globally per annum and 12,000 in the UK alone.

Drawing on my extensive experience in the housing market as a founder and now Chairman of Hunters estate agency, I urged the Chancellor to consider a radical new policy to enable young people, who currently spend three-times as much on housing compared to their grandparents, to buy their own homes. I told the Chancellor that, since its peak in 2003, owner-occupation has fallen from 71% to 63%. I said that the current method of delivering affordable homes is unnecessarily costly and convoluted. A typical developer is required to build around 30% of the homes on a site and sell them to a housing association at around 50% of the market value. The housing association then rents the homes at 80% of market value. Instead, we should sell some of those units to a first-time buyer on a low income for 50% market value. Better still, there would be no cost to the public purse.

The Chancellor said he would give consideration to all these important issues in the fourth coming election.