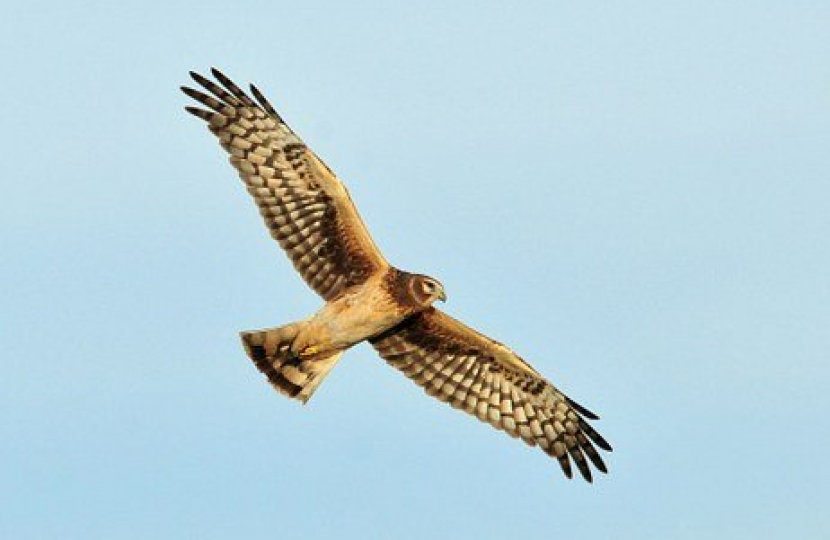 The preservation of the hen harrier has been a huge topic for my mailbag. I have received hundreds of communications about this. I can understand why because it is certainly true that hen harriers were once commonly found in upland and lowland Britain but were lost from mainland Britain around 1900. Populations recovered, but the hen harrier has never re-established itself in the English uplands, including our beautiful moorland in North Yorkshire, most likely because of persecution. To address this the Government has introduced the Hen Harrier Action plan which aims to achieve a self-sustaining and well dispersed breeding population in England and in the North York Moors across a range of habitats including a viable population present in the Special Protected Areas designated for hen harrier. In addition ministers want to ensure that a hen harrier population coexists with local business interests and its presence contributes to a thriving rural economy.

The Joint Action Plan was published in January 2016 and ministers believe that it remains the best way to restore hen harrier populations It contains six actions which individually can bring benefits for harriers, but when combined, underpin each other and have the potential to deliver strong outcomes. It includes three measures to stamp out illegality, a trial toolkit comprising two measures for land owners to accommodate safely hen harriers on grouse moors and a measure to reintroduce them to suitable habitat in other parts of England. These six complementary actions have the potential to deliver strong outcomes and set out the expected benefits from each action. It tells us who is going to lead actions and the timescales for them to be achieved.

Natural England will report annually on progress on all six actions to the Defra Uplands Stakeholder Forum and also copy this to the UK Tasking and Co-ordinating group for Wildlife Crime. In the wake of the Covid-19 pandemic there is rightly a substantial movement to ‘build back greener’ and to recognise the importance of nature and our place in it. I shall be following developments closely and hope we can see the hen harrier back in our moorlands in much greater numbers.

A copy of the plan and other information is available on www.GOV.UK.