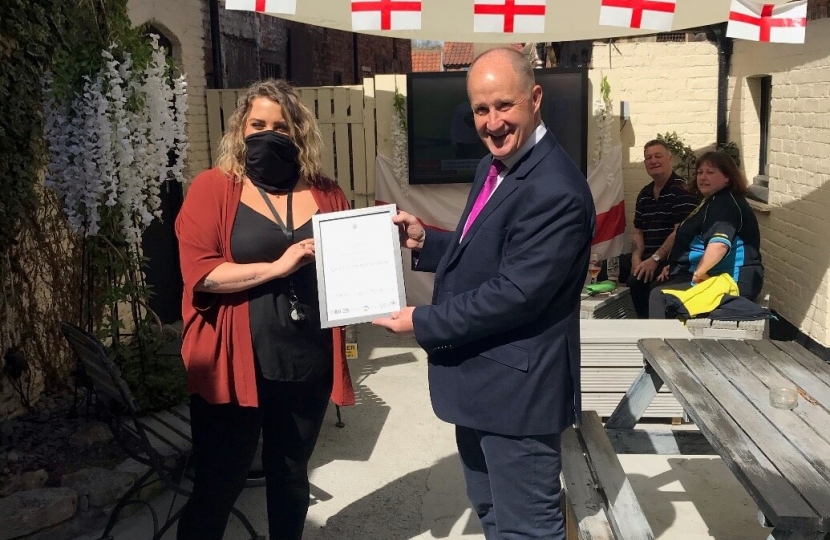 I was delighted to have presented the landlady of the Black Bull in Thirsk with a certificate recognising the support she gave the community during the Covid crisis. Kayley Bolton who runs the Black Bull decided to appeal for unused toys to redistribute to disadvantaged children. Very quickly donations came pouring in which meant that dozens of children had an extra special Christmas.

This has been a hugely difficult time for the hospitality sector but despite this many pubs have gone out of their way to support their local communities by offering hot meals for the elderly and vulnerable and food and drink to key workers. I was honoured to have been able to present Kayley with this award for the tremendous work she has done. When lockdown forced the closure of her pub she decided to do something worthwhile and appealed for toys to be given away to less advantaged children at Christmas. Not only did they make great presents but it also helped reduce the unnecessary recycling so it was win-win all round.

The award was organised by the All-Party Parliamentary Beer Group. The Black Bull is an Admiral Taverns pub. The Chief Executive Chris Jowsey said “Kayley is the local community! She is always keen to step in. Her Christmas toy appeal was amazing and we were hugely impressed by her willingness to help the local community from collecting donations to supporting customers in the floods”.

Kayley Bolton said she was delighted with the award “The amount of toys donated was unbelievable. Every time I looked in the beer garden there were more donations. Everything was brought in washed or sanitised then safely packed for distribution. I helped families here in Thirsk and then reached out to Yorwaste who were also collecting for the reuse Santa appeal supporting the charity, No Wrong Door. They were only too happy to take the donations. A large transit van was required to ship it all as there was just so much. It was an absolute pleasure to have done it and I can't thank the community enough for what they did to make it that little bit easier on some families desperately in need”.