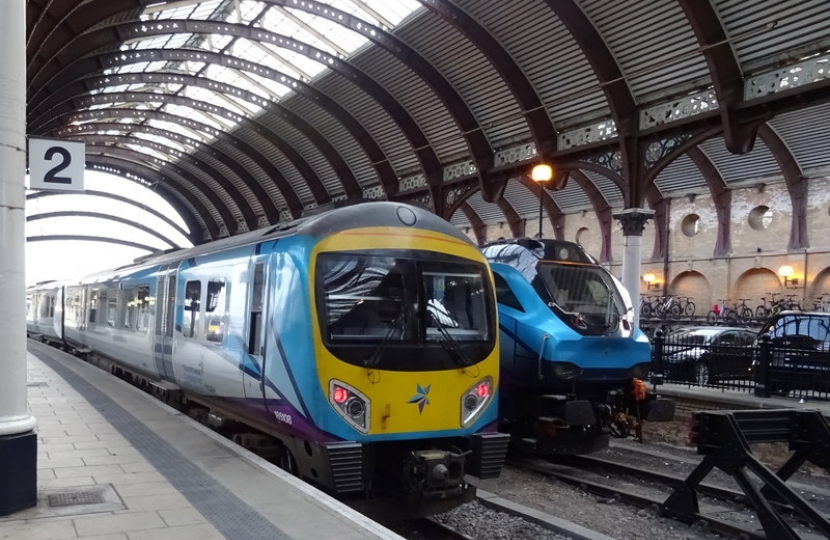 Following my intervention last month after a diabolical level of service on the TransPennine Express rail service I welcome the recent improvements to the frequency and reliability of train services between Manchester and the East Coast via Leeds and York but I have made it clear that this must be maintained. I will be closely scrutinising the operator’s performance.

I have followed up on conversations that I and my fellow Yorkshire MPs, Robert Goodwill (Scarborough and Whitby) and Jason McCartney (Colne Valley) have had with TPE Managing Director, Leo Goodwin, just before Christmas when we demanded immediate action to improve the operator’s abysmal record in delivering services on the network. Mr Goodwin assured me that services have improved significantly although he warned that they may continue to be affected by extreme weather or major works in the months ahead. According to the latest statistics fewer than 10 percent of trains were cancelled or delayed in the first week of January compared with up to 33 percent in the last 10 days of December 2019.

These improvements are a step in the right direction but there is still more to be done. Passengers have every right to expect a punctual and reliable service so they can get to work on time and go about their business without spending hours hanging around waiting for trains only to find that they are either delayed or cancelled.

On Monday (January 13th) a customer compensation scheme that cancels out the annual regulated fare increase for season ticket holders will come into effect. It will mean that customers who held a weekly, monthly or annual rail season ticket between 01 October and 31 December 2019 will be eligible for a 3% rebate of the annualised cost of their season ticket, more than covering the 2.8% average increase on regulated fares. This compensation can be claimed in addition to claims made via a Delay Repay scheme, which entitles all season and non-season ticket holders to receive a refund for journeys delayed for 30 minutes or more within 20 days.

These schemes are welcome but they are not enough. There needs to be a concerted effort on behalf of TPE to ensure that future services are reliable and punctual and last year’s nightmare experiences for passengers are at an end.

Mr Goodwin also made a verbal confirmation that there will be no reduction of service frequency on the Malton to Leeds route following a complaint from one of my constituents who said that the only way he could get to Leeds for 9.00 is if he took a service at 6.58 which means that passengers get to work as much as 50 minutes earlier than they need.

We are planning to meet the Secretary of State for Transport, Grant Shapps MP to formally ask him to continue to review TPE’s fitness to hold the franchise for the route, which is scheduled to last up to 2023.

Further information on the compensation schemes are available here https://www.tpexpress.co.uk/travel-updates/seasonticket-compensation

The Government is firmly behind businesses in North Yorkshire as we emerge from lockdown and start to rebuild the economy stronger than ever and the latest figures show the extent to which the Treasury has supported jobs, incomes and businesses across all parts of the constituency.