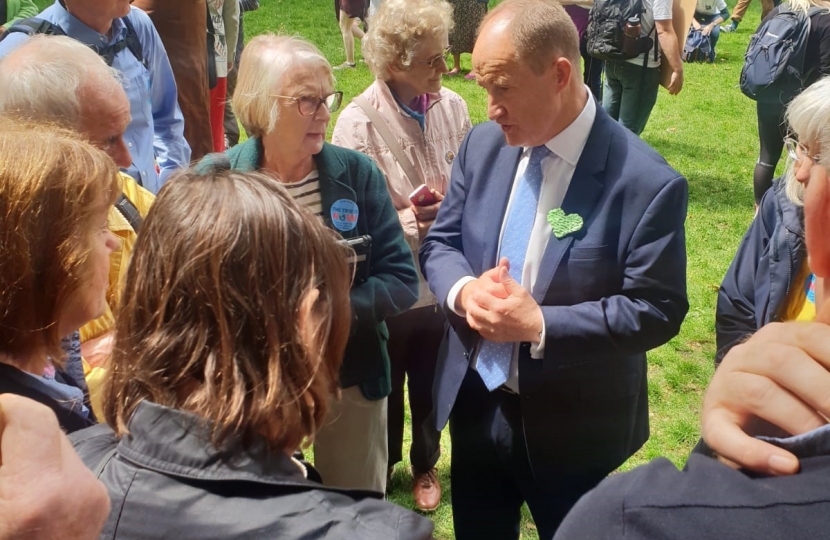 I was very pleased to meet a group of Climate Change protestors from the constituency to discuss their concerns about the future of the environment as part The Time is Now mass protest in Westminster.

The protestors asked me to join my colleagues in “setting the foundations for a brighter, greener and safer world”. They demanded that MPs introduce immediate legislation to reach net zero by 2045; introduce the Environment Act, with legally binding targets on healthy air, water, wildlife, green spaces, waste and plastic pollution; ensure that at least 2% GDPR per year is spent on climate action whilst ensuring that environment and climate change action is at the heart of the UK’s international agenda.

The group made some very reasonable points and asked some challenging questions. Climate change is a hugely important issue to us all. I certainly think we can do and should do more. The UK is the first G20 country to implement net zero by 2050 by enshrining it in law this week. This is really good news.  As I told the protestors I had given my support to a Bill introduced by my colleague, Alex Chalk MP, that committed the UK to ending its contribution to climate change to this 2050 deadline.  However, we have to be realistic about the timescale. The Independent Committee on Climate Change (CCC) has advised that 2050 would be an “appropriate UK contribution to the Paris Agreement that is in line with other climate leaders” and is “achievable”.  It’s imperative that we make sure that we do it in line with other nations so that it doesn’t put our economy at a disadvantage. We must put facts before emotion. We now need to focus on the policies to reach net zero by supporting renewables, decarbonizing transport and agriculture and so on and we must create a stable framework to achieve this.

As far as the Environment Bill is concerned the draft clauses on environmental principles and governance have been published. These are part of a broader Bill which will include legislative measure to take direct action to address air quality, nature recovery, waste and resource efficiency and to establish an independent Office for Environmental Protection (OEP) which will hold the government to account to these targets.

I told the protestors that I am “sympathetic” to their view that the dirtiest fossil fuels, like coal, must be phased out as soon as possible. However as I said in a climate change debate last week the next stage of the decarbonization of our economy will be much more difficult than the progress that we have made so far. Hydrogen does have to be part of the solution. It cannot be a question of either renewables or gas because it is important to find a solution based on facts that will work for everyone , including businesses, and which will provide all our energy needs. This should include producing a much cleaner form of gas by decarbonizing it, whilst also focusing on increasing renewables such as wind and solar power, batteries and widescale planting of trees.