My campaign to lower tax on British wine 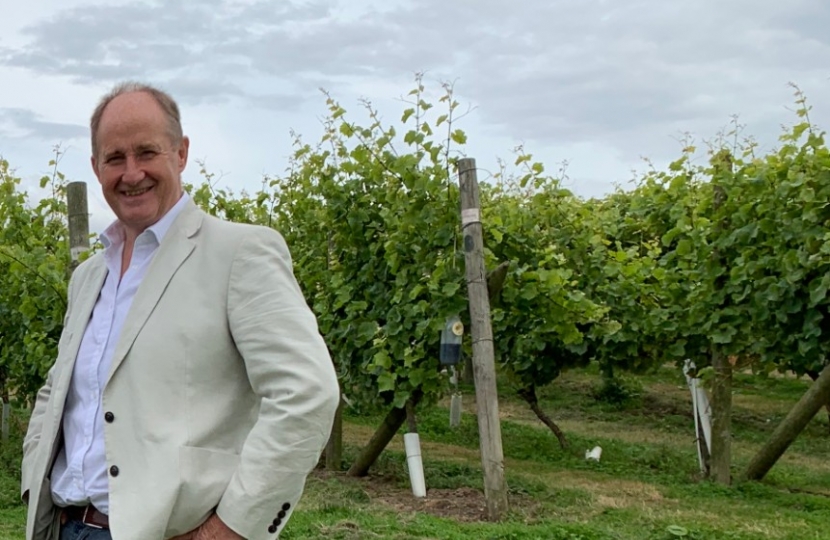 I have launched a campaign to lower duties for small British vineyards. Over forty MPs who have vineyards producing British wine in their constituencies added their support to my call for the creation of a British Small Vineyard Relief (BSVR).

The BSVR, modelled on the small breweries’ relief, would mean small vineyards across the UK would be able to take full advantage of the growing interest in British wine and not be hindered by increasing tax rates.

Following a visit to one of my local vineyards near Westow, I wrote to the Chief Secretary to the Treasury, Rishi Sunak MP, to ask that a British Small Vineyard Relief be created. The timing works well as HM Treasury is currently reviewing small breweries’ relief to determine whether reform is needed.

The UK industry body calculates that wine sales grew by 31 per cent between 2015 and 2017. Approximately 7,000 acres in the UK are under vines and it is estimated that as many as 1.7 million vines were planted last year.

The growth of UK-grown wines is a great British success story and I am delighted to see this industry go from strength to strength. Our British bubbly outdoes imported cava, prosecco and wins awards when competing against Champagne.

I have written to colleagues who have vineyards in their constituencies. The feedback from them has been 100 per cent positive and I am also receiving cross-party support. A decrease in wine duty will be a welcome boost for the industry and provide the conditions that local vineyards need to grow.

The Government has previously taken action to support the British wine industry and relieve costs on wine drinkers. In 2014, the Government ended the duty escalator for wine and froze wine duty at Budget 2015 and Budget 2017. However, the last Chancellor to cut still wine duty was Nigel Lawson, 35 years ago, and wine duty has risen by 39 per cent since 2010. The UK pays 68 per cent of all wine duties across Europe and 43 per cent of sparkling wine duties. Most wine-producing countries on the continent only tax wine via VAT.

Vineyards in my constituency are looking to expand. I do not doubt for a moment that, with fewer tax-heavy disincentives, industrious and entrepreneurial small-scale vineyards dotted around the country could build upon the global British wine brand.

With the UK leaving the EU, we should set our sights on exporting more high-quality British produce to the Rest of the World.