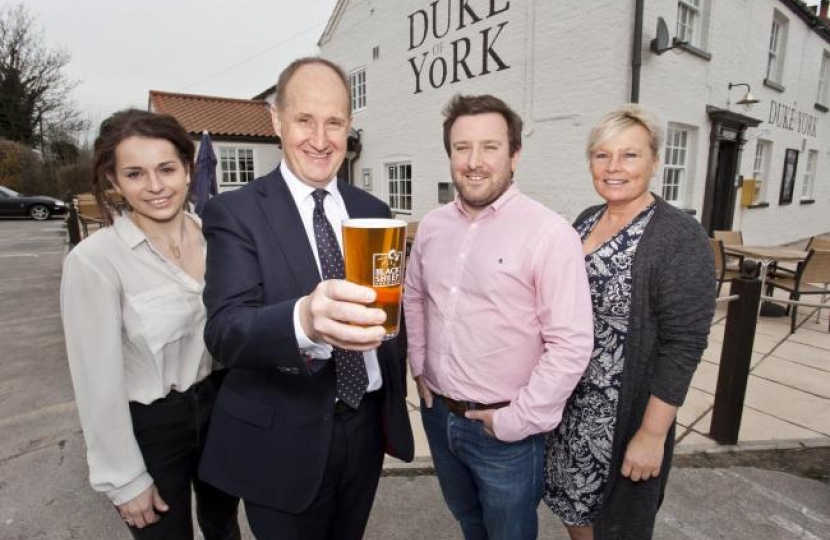 I have hundreds of pubs in my constituency, which not only act as social hubs for people from all walks of life but also provide employment for thousands of people. The freeze on duty the Government put in place in the 2018 Autumn Budget was celebrated at the time and represented a very important step in the right direction. This year we are asking for a cut in beer duty, and the scrapping of the policy of annual RPI inflationary increases written into the public finance plans, which does so much damage to this hugely important industry.

The letter, which has been signed by 85 Conservative MPs says “The brewing industry has a strong track record of working with Government on shared health and moderation objectives, most recently with the Department of Health’s Responsibility Deal, when 1bn units were removed from the market. We would also urge the Treasury to help this agenda further and incentivise the lower-alcohol beer market, so that beers brewed at 3.5% ABV and below are subject to less duty. This would provide a stimulus to this growing category of beer and broaden the marketplace for lower-strength alternatives.”

The local pub is a cornerstone of national life. However, beer duty acts as a tax on our nation’s pubs, and has the unintended consequence of driving consumers away from community businesses to cheaper alternatives to buy beer, which is then consumed in the home. We should be doing everything we can to ensure that we reverse this worrying trend of people foregoing a visit to the pub in favour of drinking in an unregulated environment.

Overall the pub industry supports 900,000 jobs across the country and contributes £23bn to the UK economy. 90% of beer consumed in the UK is also brewed here. According to the Great British Beer and Pub industry, Britain pays 40% of all beer duty in the EU while consuming only 12% of the beer. The average UK pint is taxed 11 times higher than the equivalent pint in Germany, putting our hospitality and tourism sector at a significant disadvantage to our European neighbours, which, it says, discourages much needed investment in the industry. In their letter the MPs appealed to the Chancellor to address this urgently. They pointed out that “From 2008 to 2013, under the escalator, the UK lost 58,000 jobs and 5,000 local pubs closed, whilst the Treasury received less and less additional revenue from the policy. By contrast, the policy of cuts and freezes from 2013 stabilised pub closures, whilst also stimulating investment back into the industry. This safeguarded 20,000 jobs in the process”.