EU debates hailed as a success by participants 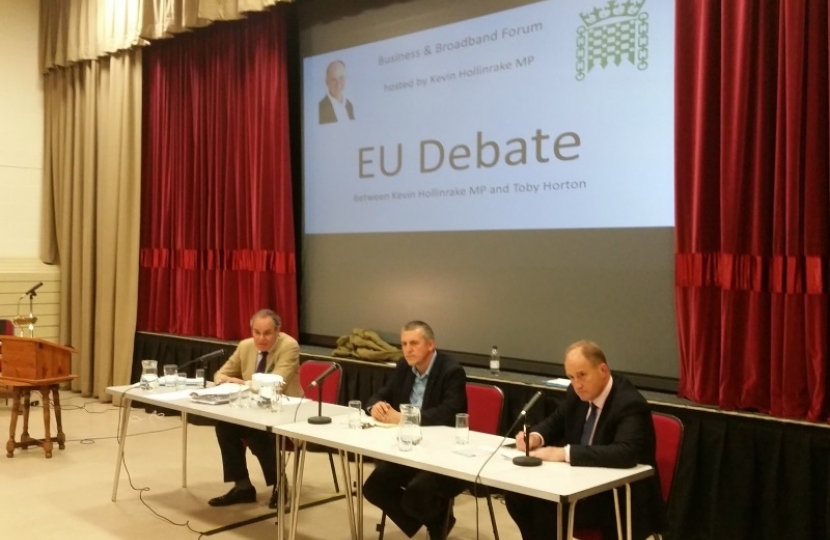 Another EU debate arranged by Kevin Hollinrake MP took place last Friday in Easingwold. Once again residents got the chance to listen to arguments for and against leaving the EU and ask questions of the speakers. The MP for Thirsk and Malton spoke for the campaign to Remain and Toby Horton, the UKIP candidate in the General Election, argued to Leave. It was chaired by the Mayor of Easingwold, Councillor Peter Nottage. This was one of several debates that have been held around the constituency in the last month. Mr Hollinrake organised the events to give people the chance to hear more about the issues and to get answers to their concerns over Brexit. In his opening speech Mr. Horton expressed his gratitude to the MP for arranging the debates: during the event various members of the audience echoed this saying how much they appreciated the chance to take part and make their own points. Mr. Hollinrake thanked everyone involved in all the debates which he has greatly enjoyed, “It has been great fun and very informative debating with Toby Horton. I am so very pleased he joined me in these events across the constituency. My thanks also to all the people who have chaired the local events. I have been delighted by the participation of the audiences: they have all been lively discussions and have covered a huge range of issues including immigration, trade, farming and education. I hope they have been of use to people before the referendum next week.” As well as those he has organised, the MP has also taken part in other debates in schools and in the community and had various local meetings with farmers and other constituents to talk about the forthcoming vote. He has also visited all the market towns in the constituency to meet residents to discuss the pros and cons of the country’s membership of the EU.