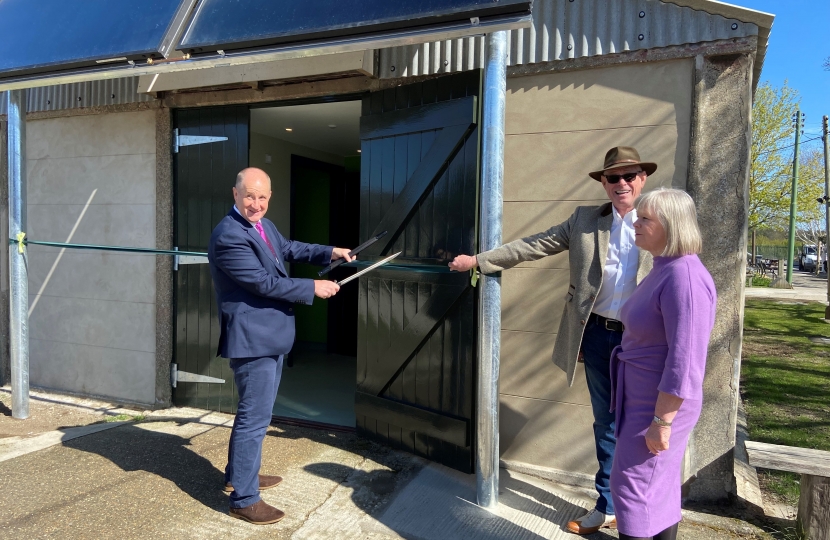 It’s brilliant news that Eden Camp is investing in reducing its carbon footprint after winning a grant from the National Lottery Heritage fund. The museum initially received £230,000 which covered wages and overheads and enabled them to invest in decarbonisation projects.

The investment included the installation of a new mains cable to eliminate the use of an onsite gas oil generator for electricity which has already reduced the Museum’s annual carbon footprint by over 140 tonnes. Toilet facilities in the centre of the site were upgraded to a modern low water alternative means thus saving the Museum up to 80% of water per flush. LED motion sensor lighting, infrared flushing for low contact, infrared taps with an auto-stopping, and upgraded building insulation for a greater heating retention have also been installed. The external addition of solar PU panels on the roof top also means heating the water throughout the building is sustainable and carbon neutral.”

I was delighted to be asked to open the new toilet facilities and was hugely impressed by all the new decarbonisation features. This is exactly what all businesses and homes should be doing so we can each contribute to the target of net zero by 2050. I understand that the museum has already reduced its carbon emission by 77 percent in the last six months, which is ahead of its 50 percent target. Not only that but they have also preserved the historic building style.

Financial Director of Eden Camp Howard Johnson said: “We believe that museums should not only serve as custodians to preservation, but should now focus on conservation, being ideally placed to make a difference. As climate change consistently becomes prominent in day-to-day life, historic venues and organisations have a renewed responsibility of consciousness when it comes to their impact on the environment, and we want to be a part of this. Our focus in the coming years is carbon neutrality and we’re proud to say we’re already on target; looking towards further reductions and promoting sustainability wherever possible”.

Eden Camp is also planning a brand-new purpose-built events centre which will also house some of its newly restored vehicles with  enhanced insulation and solar PV panels which will power the structure both in the day and at night through energy storage, with the aim of making the building carbon neutral. There will also be electric car charging ports, encouraging sustainable travel wherever possible for both staff and visitors.

Eden Camp is set to reopen on May 17th if the government’s roadmap remains on schedule.