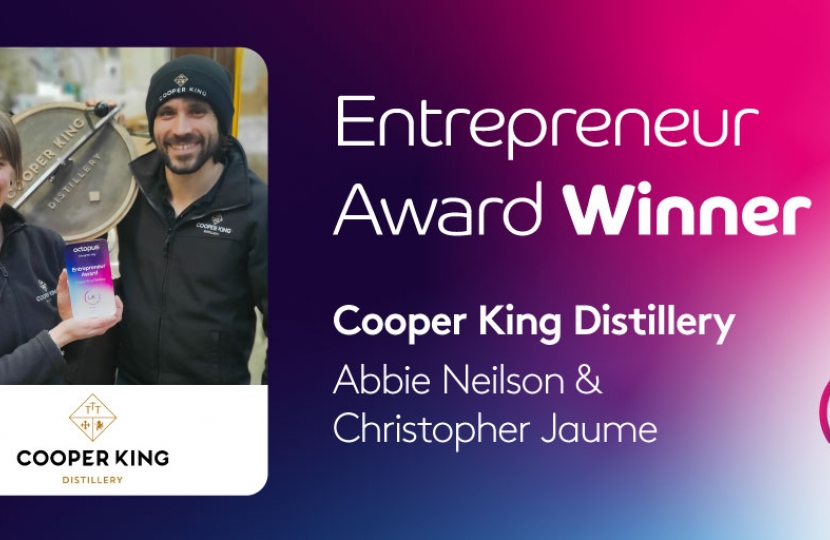 I was delighted to present the owners of Cooper King Distillery, based in Sutton on Forest, York with an Entrepreneur Award for thriving against the odds during the pandemic whilst contributing to the local community. Cooper King, which was established by Dr Abbie Neilson, a former scientist and Chris Jaume, a chartered architect is the first distillery in England to produce carbon-negative gin, runs on 100% green energy and plants English woodland for every bottle sold.

This is really well deserved. I am delighted for both Abbie and Chris. Their story about how they built their business from scratch is fascinating. However, when the pandemic hit their sales plummeted by 75%. Undeterred they turned the situation into a success story by switching production from alcohol to hand sanitiser in just 5 days supplying a national retailer and donating to the local community and frontline workers. They really are an inspiration to all budding entrepreneurs.

Co-Founder Chris Jaume said "Driven by our desire to look after both people and planet, myself, Abbie and the team have tackled the last 12 months head on and have come out stronger because of it. We’re humbled to have had our efforts recognised with this award and would like to thank Kevin Hollinrake MP for kindly nominating us."

The awards were organised by Octopus Group, the financial services and energy firm to recognise entrepreneurs who have starting and grown their businesses or used their company’s resources and expertise to support their staff and local communities. The panel judges included politicians and entrepreneurs, including Octopus Founder Chris Hulatt, Shadow Employment Minister Seema Malhotra MP, Katherine Fletcher MP and Andy Carter MP, who both started their own businesses before entering Parliament, and Karen Taylor, Founder of Parent Cloud, a beneficiary of Octopus Group’s internal Springboard scheme.

Driven grouse shooting should not be banned

There are multiple good reasons why we should not ban grouse shooting. For a start tens of thousands of people enjoy the beautiful purple and green-carpeted North York Moors which certainly does not look like that by accident.