Stepping up campaign for the A64 dual carriageway 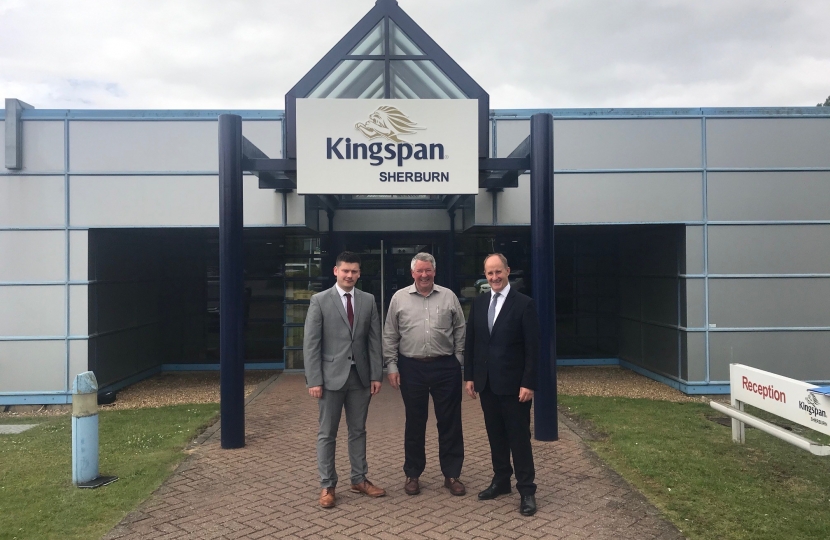 The A64 Growth Partnership and I have pledged to step up our campaign for the much-needed dual carriageway between Hopgrove roundabout and Barton Hill at another meeting with Highways England in which we stressed that the improvements are absolutely essential.

I met with business leaders, tourism bosses and public sector bodies at Kingspan's Headquarters in Sherburn to challenge Highways England and devise a plan to ensure funding for the dualling is secured from the Department for Transport when it announces its transport investment priorities in Autumn.

The meeting which was chaired by Ryedale District Council leader Keane Duncan, follows Highways England’s response to my letter signed by four other Yorkshire MPs, Robert Goodwill MP (Scarborough & Whitby), Julian Sturdy MP (York Outer), Nigel Adams MP (Selby & Ainsty) and Sir Greg Knight MP (East Yorkshire), in which we demanded to know why the assessment of the need and value for money of the improvements has gone from medium to low.

In its reply Highways England says that detailed analysis of the costs had shown that they are expected to be much higher than originally expected “As we have progressed this further work, it has become clear that the likely cost of a scheme that would deliver the identified benefits has significantly increased. The reasons for the likely cost increase include the requirement for more extensive earthworks, the high-risk of archaeological finds and the requirement for additional grade-separated crossings to maintain safety. As a result of these likely cost increases, Highways England now assesses the benefit to cost ratio of the A64 Hopgrove scheme as between 1 and 1.5.”

I am very disappointed with the current position of Highways England. The facts speak for themselves; dualling that stretch of the A64 between Hopgrove and Barton Hill would transform the economic fortunes of Ryedale and the East Coast. It would make a massive difference to millions of drivers using the road whether it is for business, leisure or commuter purposes. Major companies such as Kingspan, McCain and Sirius Minerals rely on this road for staff, supplies and contractors. Without these improvements, the delays will simply worsen. Highways England’s own A64 Hopgrove Feasibility Study estimates that traffic will grow by up to 28 percent by 2035 and the dualling of the A1237 York Northern Ring Road, which is soon to be approved under the Major Road Network programme, will also substantially increase the volume of traffic in the years ahead.

Councillor Keane Duncan said: "We all know the problems of the A64. Ryedale's future prosperity hinges improvements to this key piece of infrastructure, but sadly time is running out to secure the funding to make it happen. We have a three-month window of opportunity to make the case to the Government, or we could miss out on funding for half a decade. There is a cross section of support, from both the public and private sector, and real momentum behind our campaign. The partnership will be working as hard as it can over coming weeks to finally dual the A64."

The partnership is very concerned that Highways England has not fully allowed for future developments in their calculations and that, any decision without taking into account potential housing, business and upgrades of the link road on to the A64 would be short-sighted. They say a much better use of taxpayers’ money would be to find the extra cash for the cost of the dual carriageway a scheme which has the full support of the A64 Growth Partnership including the Local Enterprise partnerships NYCC and Ryedale DC and businesses and would last for generations to come.

Highways England representatives committed to revisiting their business case before the final decision is made by the Department for Transport later this year. I will be meeting again with fellow MPs and Highways England and ministers in Westminster as soon as possible.