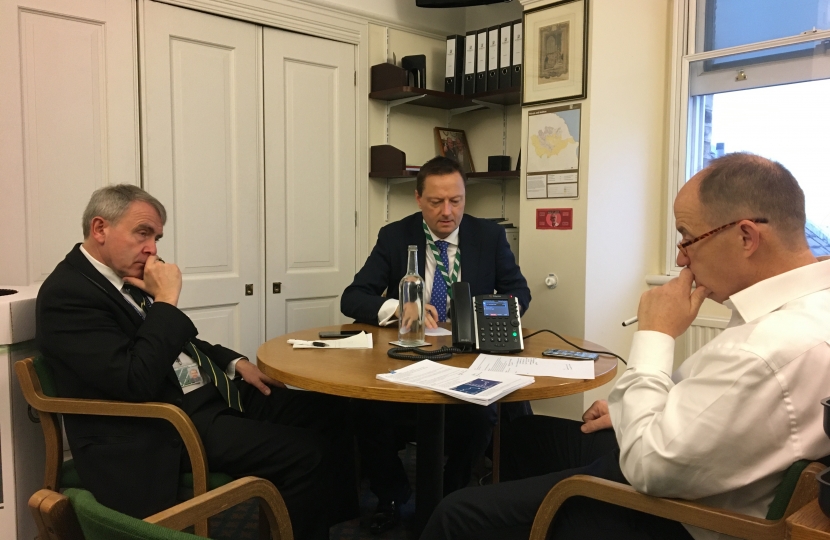 The Managing Director of TransPennine Express, Leo Goodwin, agreed to my demands to halve cancellations and improve punctuality by January and make immediate improvements from Monday.

I arranged an urgent conference call with Mr Goodwin to demand immediate improvements to their abysmal recent record in delivering train services on their network. He agreed to demands made by me together with Scarborough and Whitby MP, Robert Goodwill, and Colne Valley MP, Jason McCartney, to halve cancellations and significantly improve punctuality for when commuters return to work in January. We also made it clear that they expected to see substantial progress from Monday when many are still trying to get to work and travel before the Christmas break.

I am meeting the Secretary of State for Transport, Grant Shapps MP, to formally ask him to continue to review TransPennine Express’ fitness to hold the franchise for this route, which is scheduled to last up to 2023. I have already written to the Transport Secretary to highlight the numerous complaints made by local rail users affected by the sheer number of cancellations, severely delayed trains and missed connections. My inbox has been full with constituents getting in touch to detail their negative experiences with TransPennine Express. TPE have failed to run anything close to resembling a reliable service for over eighteen months. They have been the second worst performing train company in the country and last month, in the lead up to Christmas, we saw a drastic drop in the number of TransPennine Express trains reaching their destination on time. The litany of excuses given by them does not placate my constituents who are struggling daily on their way to and from work. Commuters should not be late for work and too late to put the kids to bed thanks to this appalling service. I feel the management are suffering from a lack of urgency with this issue and we need significant improvements in short order.

Scarborough and Whitby MP, Robert Goodwill, said “The performance of the TransPennine’s service out of Scarborough has been completely unacceptable over the last few months. Local travellers are tired of hearing excuses for delayed or cancelled trains. There is no point having new trains if the service is not reliable. People are being made late for work or hospital appointments and are missing connections at York or flights at Manchester Airport. Mr Goodwin promised that things will improve in the New Year. We will hold him to his word”.

Jason McCartney MP said “I told the CEO that TPE’s service has been a disgrace and that I expect him to be working over the weekend to drastically reduce cancellations and improve punctuality. We need the Department for Transport to urgently review TPE’s performance”.

The latest TransPennine Express performance report reveals just how poor the service has become. Only one out of every five trains arrives at the right time along the north route, which includes the journey between York and Scarborough with a stop at Malton. There were 623 total full cancellations and 579 total part cancellations in the month to 7th December. There were also 19.3 per cent cancelled and significantly late trains for the north route during that period. The past eighteen months have not been much better; according to the Office of Rail and Road, in mid-October just 38.7 per cent of Transpennine Express trains arrived within a minute of schedule in York and Leeds. Even a ten per cent cancellation rate remains unacceptable. However, we at least want to see TransPennine Express moving in the right direction of travel in the next few weeks with the aim of halving the number of cancellations and significantly late trains. They must do everything they can to bring their performance results to a more acceptable level on par, if not better, than other train companies operating around the country.

I have arranged a follow up call with Leo Goodwin in January so that my parliamentary colleagues and I can be updated on what work has been done in the preceding weeks to alleviate the chaos experienced by commuters and other rail users.